(Note: I had originally intended to write about the passing of Lesley Gore, but it was about then that the flu bug hit me. By now there have been tons of good articles posted about that talented lady, so I’ll just salute her and move on to another subject.)

Sometimes confused with bandleader Ina Ray Hutton, her older sister (or half-sister according to some sources), June Hutton was a fine singer whose career included several high points. She worked as a big band songbird, spent some time as the lead singer in a famous ensemble, and found a lot of success as a soloist before eventually fading. 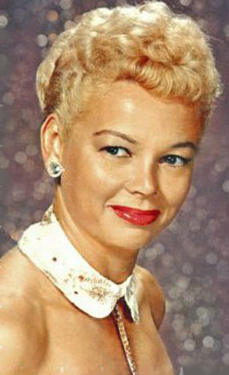 A Chicago native, she was born as June Marvel Cowan, but began calling herself June Hutton as a teenager in the late 1930s. Not coincidentally, it was about when she began singing with the all-girl band led by Ina Ray Hutton (born Odessa Cowan). It was a good start for her career, and after building her experience in a couple of other jobs she moved on to a spot with Charlie Spivak’s band, mostly as the centerpiece of his singing group, the Stardusters. (See video below.)

Spending the early years of the war with the band was great experience for the young singer, and when Jo Stafford left Tommy Dorsey’s Pied Pipers to pursue a solo career, June was able to step into her place in the much-admired group. In fact, she remained with the ensemble for several years, singing on some of its biggest hits. But by the end of the 1940s she was ready to take the next step — a solo career.

During the 1950s, she was able to score hits on several records, including “No Stone Unturned” and “Say You’re Mine Again,” no doubt helped along by her new husband. Axel Stordahl was a talented composer and arranger who’d already found a lot of success himself by then, including working with Frank Sinatra for an extended period. That in turn probably helped June make frequent appearances on Sinatra’s TV show, although she also popped up on a few others. Unfortunately the 1950s began the incursion of rock and roll into pop music, and singers like June soon felt the pinch. Within a few years she retired from performing. She was only 52 when she died in 1973 (although another source puts her two years younger).