Glenn Miller was one of the biggest names around during the the big band era, and he remained an iconic figure even after his tragic death near the end of World War II. But he was also a good friend to many, as Hal McIntye could have attested. Miller not only encouraged his band-mate to form his own outfit but also helped with the financing, and the Hal McIntye Orchestra became a solid success for a number of years. 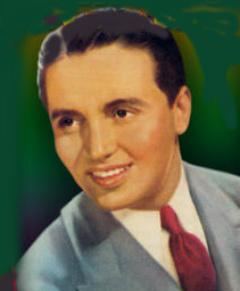 Harold William McIntyre was a Connecticut native who grew up pointed toward music, learning to play both clarinet and sax at a level that allowed him to work professionally even as a teenager. In fact, he was still in his late teens when he began leading his own small band in the early 1930s, and within a couple of years had logged enough experience to work his way into a spot with Benny Goodman. Even though it was just temporary it allowed him to catch the attention of Glenn Miller, who was in the process of putting together his own band, one that would become a juggernaut.

As one of the original members of Miller’s group McIntyre was a valuable part of the band’s success during the four years he stayed, but in 1941 he decided to try his luck as the leader of his own outfit. His boss and friend encouraged him, helped with financial support, and paved the way for McIntyre to make his debut leading ‘The Band That America Loves’ at one of Miller’s favorite spots, New York’s prestigious Glen Island Casino.

It was the beginning of over a decade of success for McIntyre, as his band became one of the most popular around. During the war years it appeared in most of the big venues, including major hotel ballrooms and the Hollywood Palladium, and also spent a lot of time entertaining the troops overseas. Along the way the band made a lot of well-received records and continued to do so in the post-war years, but as the 1950s began the big band era was drawing to a close. McIntyre’s group made one more big splash by providing the backing for the Mills Brothers’ huge hit record of “Glow Worm,” but things went downhill after that. Tragically, McIntyre was killed in a home fire in 1959. He was just 44 when he died.

2 thoughts on “Hal McIntyre Got A Boost From Glenn MIller”