I’ve decided to formalize a type of post that has already shown up a number of times on the GMC, and by formalize I mean that I’m going to give it a name and add it to the ‘categories’ tab in the left column (like I did a while back for Fantastic Foursomes). It’s the kind of piece that focuses mostly on the story behind a particular song, rather than just presenting a bio of a specific performer. A couple of examples from the past would be That Scandalous Song and Nagasaki — The Song, Not The City, but there are others*. In any case, I thought it would be nice if we gave this type of post a nifty new name all its own — Anatomy Of A Song. 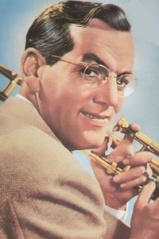 Glenn Miller’s theme song is one of the most familiar sounds from the big band era, but “Moonlight Serenade” actually evolved from an earlier Miller melody, one that went by the awkward title “Now I Lay Me Down to Weep.” It had been written by Miller around 1935 and over the next few years went through some rewrites, a couple of name changes, and more than one set of lyrics. It finally showed up as an instrumental named “Moonlight Serenade” on the ‘B’ side of Miller’s 1939 recording of “Sunrise Serenade.” It was mostly meant to be a similarly-named complement to the ‘A’ side, but it had something special going for it — and therein lies a story.

Whether you choose to believe the scene from the 1954 movie The Glenn Miller Story (video below) doesn’t really matter, because the fact remains that the song did showcase what became known as the Glenn Miller Style — a clarinet-led, sax-driven, amazingly smooth sound that fans absolutely loved. The record became a best-seller and the song would forever be identified with Glenn Miller, but it didn’t take long for some of Miller’s contemporaries to start edging in — a common practice in the big band era. That same year, Count Basie recorded the song but his version had lyrics added, which brings up another interesting story.

Although “Moonlight Serenade” had gone through various sets of lyrics during its stages of evolution, and was occasionally performed as a vocal, it was mostly known as an instrumental. In fact, an earlier scene in The Glenn Miller Story shows him being unhappy at hearing a speeded-up vocal of the song performed in a night club. But it was performed as a vocal from time to time, and in 1965 a lot of publicity was generated by the song’s inclusion on Frank Sinatra’s new album, Moonlight Sinatra. In the years since it’s been recorded by countless artists — as both instrumental and vocal — and has also shown up on dozens of TV and movie soundtracks.

*For more examples of Anatomy Of A Song posts, click on the category tab in the left column.

6 thoughts on “Anatomy Of A Song – “Moonlight Serenade””