I recently went to an actual movie in a theater — something I seldom do — and during the seemingly endless previews of coming attractions I saw one that caught my attention. It was for a film called The Sapphires, and it was about an R&B quartet from the 1960s that featured indigenous Australians — then called aborigines but now more properly known as Koori — who found some success by performing for soldiers during the war in Vietnam. (You can see it in the video below.) 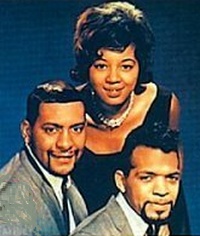 As I said, I perked up when it came on because it was supposed to be based on a true story, and I was pretty sure I remembered a singing group from the era with that name. Turns out I was right — the Sapphires did find some success in the 1960s — but it certainly wasn’t the group portrayed in the movie. In fact, it wasn’t even a quartet.

The trio’s first record featured “Where Is Johnny Now” on the ‘A’ side and “Your True Love” on the reverse, and it was well received but didn’t dent the charts. However, “Who Do You Love” soon followed and did much better, climbing to number 25. The group’s next couple of records didn’t chart but the trio had established itself as a solid success and soon moved to New York, continuing to hit the studio with regularity and generate enough output to fill an album. Before long, “Gotta Be More Than Friends” would put the Sapphires back on the charts. But even though the trio would continue to record a lot of good songs, sales gradually slowed and by the end of the decade the original Sapphires had dissolved.

5 thoughts on “The Sapphires – Then And Now”