One reason I enjoy doing this is that I keep discovering new things about subjects I thought I’d pretty much explored to death. For example, I’ve written before about my affinity for Benny Goodman, and in another piece furnished some details about his ground-breaking 1938 Carnegie Hall concert, but I recently discovered something new. It turns out that his former band singer (and girlfriend) had a part in making sure the event was well-remembered.

Helen Ward was one of the best of the big band songbirds, although she did have an off and on career as a 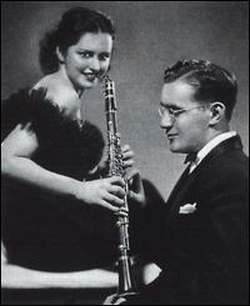 performer. A native New Yorker, she began to find professional success while still in her late teens, performing on local radio in the early 1930s. Her fine voice and mature singing style soon earned her a regular job appearing with Goodman’s band on his popular national radio show, Let’s Dance.

Before long she was an important part of his regular band too, which was at that time one of the most popular around, and it proved to be a good match — musically, and eventually romantically too. Over the next couple of years, she’d solo on many of the band’s hits — her biggest was “Goody Goody” — but her dalliance with Benny did not end in marriage as she’d hoped. Eventually she left the band and married financier Albert Marx, while also cutting back to part-time performing — the first of several on and off periods in her career.

Apparently Helen and Benny had a friendly breakup, because a couple of years later her rich husband surprised her with a special anniversary present. He arranged to have Benny’s Carnegie Hall concert recorded for her; a tricky undertaking in those days. It would later be the basis for a best-selling LP album, and later still a CD boxed set.

Helen would eventually part ways with Marx and return to performing full time, working with a lot of different bands, including those of Bob Crosby, Harry James, Gene Krupa, and even Benny from time to time. She did well but never recaptured her former level of fame, although she did find a happy second marriage to an audio engineer. She spent the latter years of her career working in clubs and making the occasional record, and died at age 84 in 1998.

2 thoughts on “Helen Ward – A Songbird With Something Extra”