Something that has always fascinated me is how often two or more members of the same family find musical fame, even if in varying degrees. I suppose it’s not that unusual for offspring, siblings, cousins, and the like to gravitate to the field that has provided success for others in the family, whether it’s music, acting or carpentry for that matter, but it’s still surprising how many of them achieve at least a measure of fame.

In an earlier piece about musical brothers I briefly mentioned the Crosbys — Bing and Bob — and I’ve featured Der Bingle separately, but 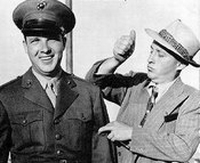 I thought it was time to refocus and dig a little deeper into the lesser-known of the two. Bob Crosby was a well-known entertainer for many years, even if he was overshadowed by his older brother.

Bob was a passable vocalist but he didn’t reach professional success quite as quickly as Bing. After dropping out of college to pursue a singing career in the midst of the Depression — a gutsy move — he found himself picking cucumbers for a while, but finally caught a good gig appearing with Anson Weeks’ band. He hung on for a couple of years and eventually moved up to singing for the Dorsey Brothers.

His biggest break came when a group of musicians from various bands decided to form a cooperative group, an idea that was sometimes used in those days to allow the musicians to share ownership. (Glen Gray and the Casa Loma Orchestra was also a cooperative.) They needed a someone to front the outfit and by then Bing had made the name Crosby a recognizable one, so Bob joined up. It was the start of a long musical career, but

Still, the band had a lot of good musicians and generated a lot of solid music that included outstanding instrumental performances along with Crosby’s personable singing. Building their fame on records and the radio, the band — and its leader — became one of the most popular around. They also began featuring more and more songs in a Dixieland style, one that became more prevalent when Crosby later formed a group called the Bobcats. Along the way, groups led by Crosby had some big hits, including “South Rampart Street Parade” and “Big Noise From Winnetka.”

Bob Crosby continued to be a popular entertainer for many years, even appearing on TV and acting in a few movies, but was probably always aware of being in Bing’s shadow. A perfect illustration is the video at the bottom, which shows Bob appearing as the “mystery guest” on What’s My Line. The way he signs in at the beginning, along with the questions from the panelists — and his answers — leave little doubt. (This is the full episode so you can skip to the 16 minute mark if you just want to see Bob.)