Not many classically-trained violinists have managed to crack the upper reaches of the pop music charts, but that’s exactly what happened in 1951 when Florian ZaBach had a million-selling record with a tune about a bird. But “The Hot Canary” wasn’t his only foray into bringing light classics to the masses. In addition to selling lots of records featuring a variety of songs, his matinee-idol looks — complete with wavy pompadour and cleft-chin — were perfect for TV, where he made countless guest appearances and even had his own show for a while. 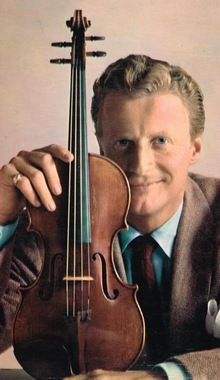 ZaBach was a Chicago native whose father was a symphonic musician, and he saw to it that young Florian Jr. received a classical music education, one that led to him playing violin with the Chicago Symphony at age 12. He then spent years studying in Europe and by adulthood was back home and performing professionally on radio and on stage. Although he’d had to take some time off to fulfill his military obligation, by the post-war years he was appearing in Washington, D.C. where he was ‘discovered’ by Arthur Godfrey.

It was the beginning of a busy period for the musician, who made multiple guest appearances throughout the 1950s on just about every TV variety show around, including those of Ed Sullivan, Milton Berle, Red Skeleton, and of course Arthur Godfrey. He was also a frequent guest on the Tonight Show, with Steve Allen and later Jack Paar. It wasn’t long before ZaBach had his own TV show too, but if producers hoped he’d be another Liberace they were disappointed, and it was short-lived.

But during all this, ZaBach was churning out record after record, wielding his Guarnerius violin with consummate skill. After his million-selling “The Hot Canary” he had a minor hit with “When The White Lilacs Bloom Again” and also had good sellers with light classics like “Jalousie.” Along the way he found many opportunities to appear as a soloist and guest conductor with some of the best orchestras around the world. He stayed active into the 1970s but eventually turned to a life of composing and arranging. He was 87 when he died in 2006.