For some reason, Christmas seems to have really taken the ol’ GMC by surprise this year. Usually I post one or two holiday-themed pieces in the days leading up to the big day, but I guess I’ve just fallen asleep this time around. Maybe I can remedy that by featuring something really different — scat-singing pioneer Leo Watson, who once performed a very different kind of “Jingle Bells.” 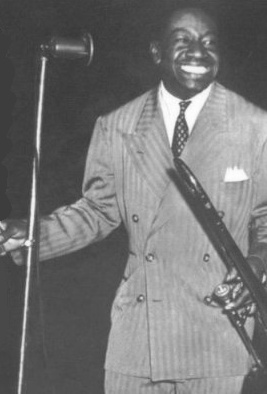 A Kansas City native, Watson began his career in the 1920s by working his way up through a number of bands as a drummer and sometimes-trombonist. But the skill that really began to get him noticed was his ability to ‘scat’ — perform a fast, improvisational style of jive talking/singing that really entertained his fans.

He came into his own when he moved to New York and began appearing with small groups. As a vital part of the Spirits Of Rhythm he starred in the group’s stage act and on the good-selling records that the guys began generating. Watson also worked with a group known as the Washboard Rhythm Kings, and within a few years was even beginning to show up with some of the biggest of the swing bands, including those of Artie Shaw and Gene Krupa.

In subsequent years Watson drifted a little, finally turning up in Los Angeles during World War II, and it was there that he sometimes teamed up with Slim Gaillard, another fast-talking maestro. Unfortunately, Watson wasn’t able to maintain a lot of career momentum, and the end wasn’t too far off. He died in 1950 at age 52.