Sal Mineo isn’t the first name that comes to mind when I’m thinking musical thoughts, but even though he was primarily an actor he did sell some records as a singer. He also starred in a movie about jazz drummer Gene Krupa, but his musical side was only one aspect of the fascinating story of his life, which ended with his violent death in 1976.

Salvatore Mineo Jr. was Bronx-born, the son of an immigrant Sicilian casket-maker, and his childhood was anything but easy. A grade school dropout, he ran with a tough crowd in his neighborhood and was constantly in trouble. The 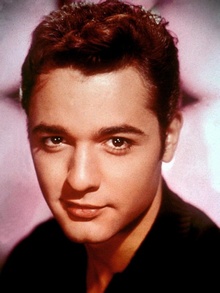 turning point came at age ten when he was arrested for robbery and given the choice of juvenile incarceration or — at the request of his mother — a school for the performing arts.

It was an easy choice, and within a few years he began to show up in small parts on stage and even the occasional TV show. That in turn led to Hollywood, and — after a couple of smaller roles — his breakout as ‘Plato’ in Rebel Without A Cause, which he made at age sixteen. That performance earned him an Oscar nomination (as did his appearance in Exodus a few years later).

By the late 1950s his acting career was going well, so Mineo decided to do what a lot of young stars did — try to become a pop music star. His initial efforts went pretty well, with “Start Movin” making it into the Top Ten and “Lasting Love” not far behind, but later records were less successful even though he did keep trying.

Meanwhile, he found a music-related activity by starring in the Gene Krupa Story, pounding the drums and smoking ‘reefer’ while portraying the troubled musician. More good parts followed, but as the years passed he began to find that he was type-cast and was being offered ‘punk’ roles (his nickname was The Switchblade Kid). Still, he continued to stay busy and land the occasional good part, even after acknowledging his homosexuality — a brave act for that era. Unfortunately it all came to an end when he was stabbed to death outside his home in 1976, the victim of an apparent robbery attempt. He was just 37.

3 thoughts on “Sal Mineo Also Had A Musical Side”