Although it’s much less common now, the music world has always been filled with performers who have ‘Anglicized’ their birth names, and a lot of those artists have been featured here. I won’t even try to list them all, but one large grouping was explored in an earlier post, the Quintessential Italian Crooner.

Some of those who change their names seem to leave their culture far behind, but others continue to embrace it and weave it into the fabric of their performing lives. One who always 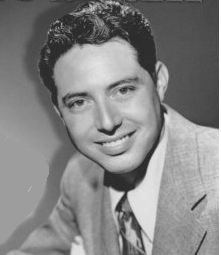 respected his heritage — and returned to it in a big way later in his career — was crooner Andy Russell, who was born in East LA as Andrés Rabago Pérez.

Still a teenager in the late 1930s, young Andrés began gaining experience in local bands as both a drummer and a vocalist. Over the next few years he gradually moved his way up until he was working for big name bandleaders like Alvino Rey, and he began to be featured more and more as a singer. By now known as Andy Russell, he soon found himself appearing regularly on radio and also hitting the recording studio, eventually producing his first hit, 1944’s “Besame Mucho.”

The success of that record would be eclipsed by his next hit, “Amor,” which would become his signature song as he continued to be a popular crooner in the post-war years, even occasionally showing up in movies. Included among his best-selling records were songs like “I Can’t Begin to Tell You,” “Laughing on the Outside,” and “Pretending.”

Russell’s popularity continued into the early 1950s and he even made TV appearances from time to time, but career momentum began to slow. He decided to rededicate himself to the music of his heritage and entertaining his many Latin fans. Moving first to Mexico and later to Argentina, he enjoyed success for many years, even hosting his own TV program for a while. In later years, he would also spend time back in the states, eventually dying in Arizona in 1992.