One of the longest-running and most intriguing careers in popular music has been that of singer/songwriter Sonny Curtis, who is still active after more than a half-century in the business. Along the way, the Texas native has had connections with everyone from Buddy Holly to Mary Tyler Moore.

Like Holly, Curtis grew up in the Lubbock area and even performed with Buddy on local radio while both were still in their teens. (He also played alongside — and was idolized by — a young DJ and 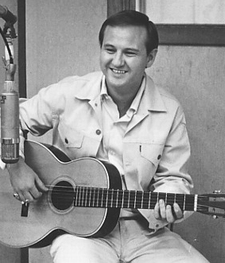 part-time entertainer named Waylon Jennings, who would go on to have a legendary career of his own.)

Curtis ended up joining Holly’s early group, the Three Tunes, and also made a few early records with them. He later went his own way but always remained on friendly terms with Holly, and many years later would write and record a song titled “The Real Buddy Holly Story.” It was his answer to what he felt were inaccuracies in the popular 1978 movie starring Gary Busey.

After Holly’s death in 1959, Curtis would occasionally perform with the Crickets, and through the years would also make appearances with stars like Slim Whitman, the Everly Brothers, and others. He also managed to find the time to make some records of his own, including “Wrong Again,” “My Way Of Life,” and “I Fought The Law,” which would later become a bigger hit for the Bobby Fuller Four and others.

But it was his 1991 induction into the Songwriters Hall of Fame that indicates his lasting legacy. Among his hundreds of published songs are pieces like “Walk Right Back,” which was a big hit for the Everlys, and “A Fool Never Learns,” recorded by Andy Williams. But to many his most familiar tune might be his iconic theme for the Mary Tyler Moore Show, “Love Is All Around.” That song, along with other genre-crossing pieces, illustrates the diversity of this musical talent, who is still occasionally performing his music — sometimes along with the reconstituted Crickets.