I love to explore the history of early rock and roll, digging into the stories behind some of the names that were familiar to me in my teen years. The information we now take for granted on the internet was probably available in those days too, but only the most devoted fans would bother to dig it up. Now any boob with a computer can do it (as I’m demonstrating here).

One early rocker who fascinates me is Wayne Cochran, who took flamboyance to a new level. Although he was best-known for his soft teen anthem “Last Kiss,” he was more at home belting out something like “Get Down With It.” Calling himself The White Knight of Soul, he wore bright costumes and sported an enormous white pompadour, presenting a sort of bizarro-world James Brown image while fronting his group, the C.C. Riders (Cochran’s Circuit Riders). 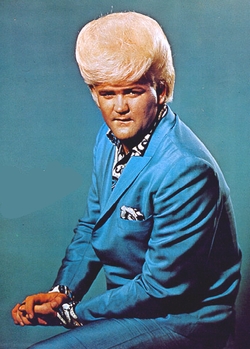 The Georgia-born Cochran first began to attract the attention of local music fans in the mid-Fifties, but it took him a few years to break into big time stardom. That occurred when he decided to emulate the Godfather Of Soul; not only patterning himself and his group on James Brown’s act, but also by following the same kind of exhausting tour schedule.

Of course, Cochran never had the kind of lasting success found by James Brown, but he did make a lot of fans during his touring years, and he and his guys did have some talent — the near-mythic Jaco Pastorius is said to have spent some time with the group while still a teenager. Cochran also sold a lot of records, although his “Last Kiss” ended up becoming a bigger hit for J. Frank Wilson and the Cavaliers.

The relentless touring schedule and countless long shows eventually began to affect Cochran’s voice, and he decided to settle in Miami and entertain fans in his own new club, the Barn. It became a popular spot for a lot of the area’s residents — including Jackie Gleason — even though the shows had become a little more about glitz and a little less about the star’s singing.

Cochran enjoyed many years of success in the club, which was also known as The House Of Soul, and along the way even published a cookbook titled Wayne Cochran’s Soul Recipes. Eventually retiring from active performing, most of his attention in later years has been as a born-again Christian minister.