On the occasion of the recent dust-up over NBC’s Tonight Show, including an eviction of Conan O’Brien and ascension by Jay Leno, my thoughts turned to the history of the show. Specifically, the years during which Johnny Carson made a regular practice of turning over the reins to a parade of ‘guest hosts’. The occupants of his chair included some of his favorite performers, and in some cases good friends too. That’s why I’m giving them a special designation — ‘Carson Cohorts’.

Like many long-time employees, Johnny Carson had a lot of vacation time to use up and in later years he also took off every Monday. NBC’s solution — more common then than now — was for temporary hosts to come in to do the show. It eventually evolved into the designation of a ‘permanent’ guest host — or hostess, as was the case with Joan Rivers, who famously earned Carson’s anger by starting her own competing show. 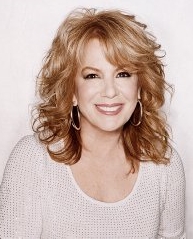 Obviously, Jay Leno eventually held the job that led to his taking over for Carson, but it was the the rotating roster of occasional guest hosts that formed what was an all-star lineup. Although many were comedians like Steve Martin, Bob Newhart, or George Carlin, there were also plenty of musical hosts. Included among them were performers like John Denver, and a very talented lady named Florencia Bisenta de Casillas Martinez Cardona, better known to most fans as Vikki Carr.

A native of El Paso, Texas, Vikki Carr is probably best known for her biggest hit, “It Must Be Him”, but she also had good sellers on other pieces, including “The Lesson.” In addition, she’s always been proud of her Hispanic heritage and has reflected that in many of her best records. In fact, she also recorded her biggest hit in Spanish — “Que Sea El.”

Carr’s career actually started in the Sixties with appearances in local El Paso clubs, but she eventually gained enough experience in spots in Reno and elsewhere to land a recording contract. Within a few years her records were showing up with regularity on the best-seller charts and she had become a popular and well-known singing star.

Through the years she’s continued to celebrate her heritage by recording numerous songs in Spanish, an endeavor that has resulted in three Grammy awards. She is also involved in many charities and is currently celebrating 50 years in show business. Johnny would be proud of her.

3 thoughts on “Vikki Carr – One Of Carson’s Cohorts”