You might recognize that as the oft-quoted evaluation from an early talent scout, giving his opinion about the then-young performer Fred Astaire. The punch line, of course, is that he became one of the biggest stars of all time; and while his career was certainly anchored by his nonpareil dancing skill, he wasn’t half-bad at the other stuff.

As is often the case with legendary performers, Fred Astaire’s story is a familiar one, but I thought I’d focus on one interlude in his long career and see what it can tell us about how things sometimes worked out in strange ways. It was the time that Fred did the Yam.

The Yam in question was not a vegetable, but a dance and a song, written by Irving Berlin. It was featured in the 1938 film Carefree, a movie that actually ended up being better known for a couple of other things. First, Fred laid a huge kiss on Ginger Rogers; an unprecedented event that was supposedly meant to disprove the rumor that the two really didn’t like each other. Secondly, the movie included a dance sequence using the song “I Used To Be Color Blind” that included revolutionary slow-motion techniques. The producers thought that number was so special that only budget restraints kept them from following their initial plan to film it in color.

As for the sweet potato ditty, Fred thought it was a silly song and wouldn’t sing it for the movie. It ended up being a solo for Ginger, although they did dance after she sang, and Fred sort of did one line. 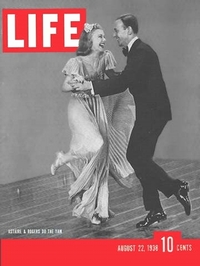 But then things got a little strange. Publicity for the movie included a cover story in Life magazine, and it appeared to be all about a new dance sensation called — you guessed it — the Yam. The cover even featured a big picture of Fred and Ginger doing it. (The dance. What did you think I meant?)

Apparently Fred eventually decided to join the parade, because he later made a record of the song himself. His version of “The Yam” ended up becoming a part of his singing legacy. No word on whether he and Ginger ever did it again.

2 thoughts on “Doin’ The Yam With Fred Astaire”