I would think that an artist would encounter a lot of obstacles in generating a debut album. First of all, they’re almost certainly not well-known, so even getting the album made is an accomplishment.

But even beyond that, they still have to get the album exposed to music fans, who will hopefully find that the artist has something to offer. Of course, that part of the process might have become a little easier than it once was, given the prevalence of web-based reviews (like this one) and the ease of listening to clips by clicking on an album link (like the one at the bottom).

But enough about the process — let’s talk about the artist. Jazz vocalist Kelley Suttenfield is certainly not a familiar name to most music fans, but her debut 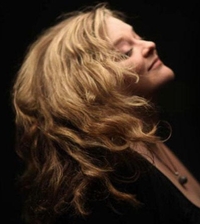 album, Where Is Love?, now out on the Rhombus label, is an intriguing effort. She’s a talented pianist with a classical education, but she has always enjoyed singing too, and it was as a jazz vocalist that her life as a professional really began. Based in New York, she has continued to study and hone her craft while making regular appearances in a number of venues, including radio, TV, and clubs.

For her debut album, she’s picked an eclectic mix of a dozen tunes, with some jazz standards, a few reworked pop classics, and a couple of real surprises. Among the latter I was probably most intrigued by her inclusion of Bobbie Gentry’s country classic, “Ode To Billy Joe.” It takes some real chutzpah to tackle a song that’s nailed into the consciousness of a whole generation like a rusty thermometer on a barn door, but Suttenfield does a good job with it. Her smokey voice with a bit of added twang fits perfectly into the mood of the song, although I was less comfortable with the instrumentation behind her. I understand that the arrangement was intended to introduce a jazz/funk element into the song, but it felt like too big a leap for me.

The backing group — a solid jazz quintet — was better utilized on tracks like the Styne/Cahn standard, “I Fall In Love Too Easily,” and Mancinis’s “Charade,” both of which also allow Suttenfield to show a softer, almost playful side with her expressive voice. In direct contrast was her fast and swinging interpretation of a pure jazz delight, Wes Montgomery’s “West Coast Blues.” It was probably my favorite here,

but other good listens included the Beatles’ “And I Love Her,” and the Latin-flavored “Coração Vagabundo,” both helping add to a display of a vocal talent with many facets.

Overall, a nice debut for Kelley Suttenfield, one that’s well worth consideration by any jazz fan.