Eddie Allen is a busy man these days. Last month I reviewed the veteran jazz trumpeter’s new album as the leader of a large band called the Aggregation. That effort was a solid collection of big-band music, and the band was — well — big, with something like 17 members.

Now Eddie is fronting a smaller group and joining the current explosion of seasonal music with Jazzy Brass For The Holidays. Eddie also produced the album, which is now out on the DBCD label.

As you might expect from the title, Eddie’s sextet is dominated by brass instruments. Joining Eddie on trumpet is Cecil Bridgewater, and they’re accompanied by W. Marshall Sealy on french horn and Clark Gayton on trombone. Filling out the group are bassist Kenny Davis and drummer Carl Allen (who also tickles the glockenspiel from time to time).

The 14 songs on the album are pretty much those you’d expect, but no less enjoyable for that, especially if you like your holiday music brassy and swinging. It works out pretty well for songs like “Hark, The Herald Angels Sing,” and “Deck The Halls,” which was especially nice.  The style might be a little less successful on softer songs, like “O Holy Night,” but some listeners might still appreciate the mellow sounds of trombone and french horn. 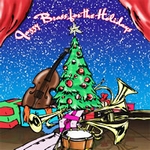 Eddie also arranged all the pieces here, and several mirror the veteran musician’s jazz background, turning up the bop a notch or two. My favorite was probably the rousing “Good King Wenceslas-Cool King Wenceslas,” but a number of other tracks also evoked some retro memories. Some of the best include “Frosty The Snowman,” and the bouncy version of “Let It Snow! Let It Snow! Let It Snow!,” which certainly must break some kind of record for the greatest number of exclamation marks in a song title.

If you’re looking for seasonal music with a difference, Jazzy Brass For The Holidays is a package you’ll enjoy opening. Recommended.