When you look at the current music scene and see the various methods used to promote the performers, it would be easy to think that it’s a relatively new phenomenon, but it’s not. Historical precedents are varied and numerous. For example, Mozart’s father tirelessly promoted his son as a young genius and a musical prodigy — which he was, but without dad’s help he might not have been recognized as such.

During the the golden age of swing bands — the 1930s and 1940s — some of the promotional ideas included things like calling Benny Goodman the King Of Swing, but the King wasn’t part of a musical couple. That would be Red Norvo and Mildred Bailey, who were known as Mr. and Mrs. Swing. 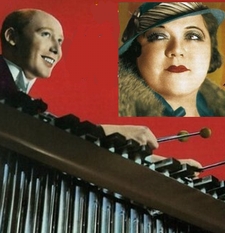 The twosome met when both appeared with Paul Whiteman’s orchestra in the early 1930s. Norvo was a dancer turned xylophonist (he later switched to vibes) and Bailey was a young vocalist who was beginning to make a name for herself. In addition to night club work, she’d already made some radio appearances, and her new husband (her third) was soon performing and recording with her.

For the rest of the decade, “Mr. & Mrs. Swing” headed up a band that was a hit with fans everywhere, churning out a number of good-selling records, including many standards like “Don’t Be That Way (clip),” “Honeysuckle Rose,” and “More Than You Know.” And even though the twosome later divorced and went on to a variety of separate appearances in other bands, they continued to occasionally perform together too.

Mildred Bailey died in 1951 at just age 44, the victim of complications from diabetes, but Norvo had a long, long career. In the later decades of his performing life, he spent more and more time playing alongside Benny Goodman, including years spent as part of the Benny Goodman Sextet, and also leading his own groups.  Norvo was always completely on board with the many changes occurring to jazz through the years, managing to stay active and relevant through the eras of bebop, post-bop, and modern jazz. By the 1990s, worsening health had caused his retirement, and he died in 1999 at age 91.