We can all understand the importance of self-reliance, but how we express the need to take care of ourselves can sometimes be a little baffling to those unfamiliar with a particular idiom. A good example is an expression that’s been around for many generations, one that has become so firmly entrenched that it has even generated a number of songs with varying lyrics but the same title — “Root Hog, Or Die.”

It’s easy enough to understand the connection if you realize that hogs are survivalists of the first order. Their keen sense of smell, along with their ability to plow through dirt and detritus with their near-prehensile nose — known as “rooting” — means they will always find sustenance. In fact, it’s that rooting ability that makes a certain kind of trained hog valuable for truffle hunting. Unfortunately, their tendency to quickly scarf down the fungus has caused many truffle hunters to switch to trained dogs instead, but you can’t top a hog for knowing how to take care of itself.

As a song, “Root Hog, Or Die” carried a message that resonated with a lot of different folks through the years, although the lyrics often changed to fit the circumstances. It started showing up even before the Civil War, with different versions appearing everywhere from mining camps to minstrel shows. During the war itself, both sides sang their own variations of the song, but in every case — then and later — the song always had the key phrase and it’s message of self-reliance.

By the 1930s, various versions of “Root Hog, Or Die” had appeared in a lot of areas around the country. That included Chicago, where an early R&B group called the Harlem Hamfats recorded the song. And even though none 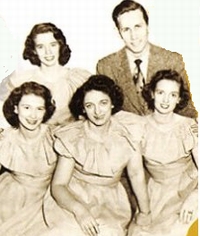 of the musicians were actually from Harlem, the second part of the group’s name certainly fit the song.

Rural Americans were probably more familiar with a version of the song made popular by the Carter family. The legendary country music group turned the song into a spirited pledge by a country girl who decides that she can’t depend on her man, so she’d better learn to take care of herself. As she says in the song, “If I don’t work, I’ll starve to death — it’s root hog, or die.”

One of the family’s best recordings of the song is a 1949 version that features guitarist Chet Atkins playing behind Mother Maybelle Carter, but even though the song still serves as a cautionary reminder, it’s important to not take it too seriously. After all, a later Carter girl — Johnny Cash’s wife, June Carter Cash — also recorded it, and I think the Man In Black provided pretty well for her.

4 thoughts on “A Porcine Song With A Message”