Presented for your perusal is the second in a series of reviews (previously: Nat Adderley) based on Concord’s Keepnews Collection, a salute to legendary producer Orrin Keepnews. This edition finds us taking a look at a Coleman Hawkins classic, The Hawk Flies High, now reissued with 24-bit digital remastering.

Coleman Hawkins was one of the earliest of the great jazz saxophonists, with a professional career that started in the 1920’s and lasted over four decades. He was one of the pioneers of improvisational 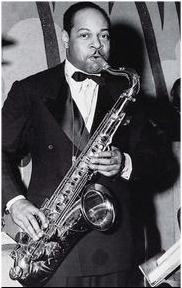 play, equally at home in the swing band era and in the later years when jazz began to diversify.

The Hawk Flies High was originally recorded in 1957, when he was in the latter stages of his career but still fully in the flow. His choice of sidemen points to his comfort level with the modern stuff, enlisting the aid of young be-boppers like trombonist J.J. Johnson, trumpeter Idrees Sulieman, and Hank Jones on piano. But he included some veterans too, such as Oscar Pettiford on bass, Jo Jones on drums, and guitarist Barry Galbraith.

The six tracks on the album are mostly originals from the modern era, although I was happy to note the presence of one of my favorite standards, “Laura.” It’s an outstanding showpiece for both Hawkins and Johnson, but not really typical of the majority of the album which is filled with newer pieces, including several written by the participants themselves.

Among those is pianist Jones’ bop piece “Chant,” and Sulieman’s “Juicy Fruit,” a long piece that not only gives the trumpeter himself several nice opportunities for improvisation, but provides plenty of space for the others too — and they don’t disappoint. Hawkins is in fine form (as he is on every cut) and I also especially enjoyed bassist Pettiford’s interplay with the brass.

Also among the tracks on the album is the Hawk’s own “Sancticity,” a tune that’s a little closer in style to the swing band sound of his earlier years, and it was one of my favorites. But every song on the album is a keeper, proving once again that the folks at Concord know jazz. Highly recommended.