I’ve enjoyed silly songs for a long time (and have written about them before) but I’m not alone in my admiration. Fans of veteran radio personality Dr. Demento have long appreciated the unusual music he’s brought their way, and he’s given credit for helping make a star of Weird Al Yankovic and a few others. But Demento’s career as a DJ specializing in silly songs was at least partially the result of showcasing a star from an earlier era.

Demento (Barry Hansen) was trying to get started as a DJ in the early 1970’s when he discovered that whenever he played an old novelty tune called “Transfusion,” by a performer named Nervous Norvus, listeners loved the goofy song. Recognizing a good thing, he continued featuring more and more novelty tunes, and his career has flourished ever since. 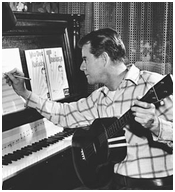 As for the mysterious Nervous Norvus, he was a character created by a guy named Jimmy Drake. The California-born Drake had been around the music business for years but had mostly worked as a song-writer and as someone who specialized in producing demo songs. He also was very skilled at creating and mixing sound effects, and this was a talent that would come in handy when he began to pay attention to his friend and mentor, Red Blanchard.

Blanchard was a DJ and a performer himself, but he saw something special in Jimmy Drake — someone who not only was a clever songwriter, but who also had the ability to ingeniously weave his special sound effects into the songs he performed. He encouraged Drake to pursue his talent and Nervous Norvus was born.

In 1956, Drake recorded “Transfusion,” and listeners were amazed to hear someone singing about an auto crash — complete with screeching sound effects (later used on the Shangri-Las’ “Leader of the Pack”). The song also featured a lot of gory details, and when he sang ‘slip the blood to me, Bud’ or ‘pour the crimson in me, Jimson’, it horrified a lot of people. The song was banned on many radio stations, although that probably just helped boost its popularity.

Drake soon had another good-seller with “Ape Call,’ which featured someone who sounded a lot like Tarzan. Over the next few years the performer followed with many other novelty tunes about everything from cavemen to flying saucers, and always with outstanding sound effects, but he gradually faded from the public eye. He died in 1968 — a couple of years before Dr. Demento helped America rediscover his special kind of music.