Several years ago I began a new feature called Saluting Silly Songs, a series of posts that spotlighted goofy songs and the talented artists who performed them. To name just a few; Weird Al Yankovic, Spike Jones, and Commander Cody come to mind. Today’s featured duo built their career on a collection of hilarious parodies of country and pop songs, and sometimes called themselves “The Song Butchers”. 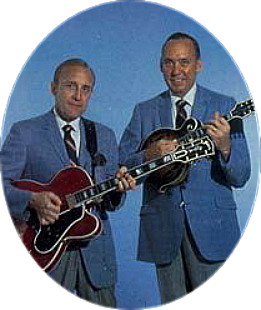 Homer and Jethro (Henry Haynes and Ken Burns) were still in their teens when they first began performing on radio in Knoxville, Tennessee, in the late 1930s. Both were talented musicians – Homer on the guitar and Jethro on mandolin – and were pretty much conventional country style at that time. Over the next few years things went well for the young guys as they found more exposure on regional radio and stage shows but then World War II came along and both were drafted.

As soon as the War was over the ex-partners found their way back together to try and restart their career. They soon discovered that one of the most popular parts of their act was when they sang satirical versions of popular songs. It would become their blueprint for success. Over the next two decades the pair produced a string of hits, beginning with “Baby It’s Cold Outside”, featuring June Carter (Cash).

Their highest charting single came along a few years later. It was a parody of Patti Page’s enormous best-seller, “Doggie In The Window”, that they titled “How Much Is That Hound Dog In The Window?” Quite a trick, taking a song that was already goofy and making it funny.

The duet churned out album after album while also frequently appearing on radio and TV, and hooked up with Spike Jones, the king of silly songs, for a while too. In 1959 Grammy came calling with an award for Best Comedy Performance for their “Battle Of Kookamonga”, a take on Johnny Horton’s “Battle Of New Orleans”.

During the 1960s Homer and Jethro continued to sell a lot of records, while also keeping up with the current music scene by recording songs like “I Want To Hold Your Hand” — a version much different than the Beatles’ mega-hit.

They were also enormously skilled instrumentalists, often sitting in for recording sessions with stars like Chet Atkins. Additionally they had a wide interest in all kinds of music, counting the legendary Django Reinhardt among their influences, and would sometimes exhibit their own jazz chops.

By the close of the decade Homer and Jethro had expanded beyond country music and established themselves as mainstream artists, appearing regularly on stage and TV. They also became well-known as the stars of a series of TV commercials for Kellogg’s Corn Flakes. Unfortunately things ground to a halt in 1971 when Haynes (Homer) died of a heart attack, and even though Burns (Jethro) recruited a new partner they found limited success. He continued to be musically active as a soloist or appearing with other groups until his death in 1989. A few years later Homer and Jethro were inducted into the Country Music Hall of Fame.