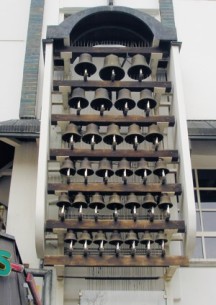 There are a lot of things that we found funny as kids just because of their odd and unusual names, and I can remember one of them being the glockenspiel. I’m pretty sure that I had no idea what it really was when I was growing up, but I seem to remember hearing the word used, possibly in a comedy routine on TV. Something along the lines of: “Stick that in your glockenspiel and smoke it!”

It is, of course, a musical instrument, and one that has been around for a long time, but what we now think of as a glockenspiel is very different from the original. The earliest versions began showing up in Europe several hundred years ago, and the name is a clue to the form they took. Glockenspiel is German for bell play, and that’s what the earliest forms were — a framework of bells of varying sizes which made musical notes when struck with hammers. The most elaborate use of the gizmo was in large animated musical clocks of the era, many of which are still in operation.

Eventually it became simpler to replace the small bells with steel plates on a framework, and the glockenspiel — which is known in France as a carillon — became a much

more manageable instrument for orchestras to use. Although it wasn’t exactly the centerpiece of an orchestra, it was available for composers to include in their scores and many of them did just that. Classical legends like Handel and Mozart had already written for the instrument when it was still a rack of bells, but a more user-friendly rig no doubt added to its appeal, and many others found ways to fit its tinkling sound into their compositions.

Eventually the glockenspiel evolved into something that was closer to more familiar instruments like the xylophone or vibraphone, and in subsequent years it began to show up in just about every genre, including jazz, pop, and rock, but more later about that. There is another variation of the instrument that has proven to be popular in marching bands. Often called a bell lyre, it’s a portable glockenspiel mounted on a shape resembling a lyre, and is even sometimes the co-star of specialty ‘drum and lyre’ marching bands

As promised, here’s a little more about modern pop and rock artists using the glockenspiel. Some of the names that might surprise you are Jimi Hendrix’s band, the Beatles, and Springsteen’s E Street Band. Some of them, including Panic! at the Disco and Radiohead, have utilized the instrument in several songs, like the one below. You can hear the glockenspiel from the beginning and about half-way through you can also see it being played.

And finally, the glockenspiel has proven to be a natural for kids. Relatively easy to learn to play and lending itself to colorful and simpler modern designs (although some of the smaller ones are technically not glockenspiels) it has become a favorite of many school-age kids or even younger. Of course, there’s probably an age limit as far as making any recognizable music, but they can still always have fun!

4 thoughts on “Glockenspiels Are Not What They Used To Be”