I’m not sure if the expression is common everywhere, but I’ve often heard the term ‘go-getter’ applied to an ambitious, hard-working, driven person. That would certainly describe country music dynamo Jimmie Skinner, who had a long and diversified career, not only as a performer and songwriter but also as the co-founder of a record company that turned into a mail-order success story. 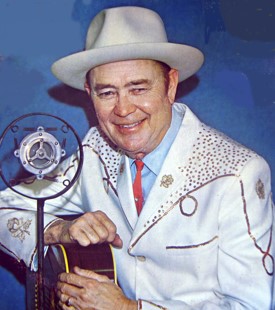 Born in rural Kentucky, Skinner moved with his family to the Cincinnati area in the 1920s. Still just a teenager, he wasted no time working his way into singing spots on area radio stations, often accompanied by his brother Esmer. During the 1930s the brothers bounced around the business for a while, trying for a recording contract but striking out. Finally Jimmie started devoting more time to songwriting while also working as a radio DJ.

Within a few years he’d started to sell some of his songs, notably “Doin’ My Time,” which was recorded by several singers (including Johnny Cash a few years later) and “Let’s Say Goodbye,” a hit for Ernest Tubb. Skinner’s songwriting success continued on into the 1950s but he also began to pick up a little traction as a recording artist himself, making a few records along the way but not really breaking out until he teamed up with a guy named Lou Epstein.

Epstein was a record company veteran who would spend the next decade or so working with Skinner, helping him with his career and also teaming up to found a record company, along with opening the Jimmie Skinner Music Center, a Cincinnati mail-order and retail record store that became a landmark. Meanwhile the singer continued to work in radio and occasionally on local TV, and by the late 1950s began to enjoy some good record sales himself, peaking with Top Ten hits on “What Makes a Man Wander,” “Dark Hollow” and “I Found My Girl in the U.S.A.” He also did well on a series of duets with Connie Hall, but as the years passed record sales inevitably began to slow, and after Epstein died in 1963 the store and mail order business faded too. In his later years Skinner turned more and more to songwriting and making occasional guest appearances while relocating to Nashville, where he died at age 70 in 1979.

2 thoughts on “Jimmie Skinner Was A Go-Getter”