When I read recently that country singer Cal Smith had died, my first impulse was to find the previous post I’d written about him and point folks to it. The only problem was that I had never written about him before, even though I thought I had. After all, his signature song — “Country Bumpkin” — has always been a earworm for me. You know, one of those songs that just seem to pop into your head from 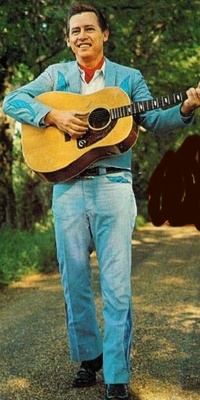 Although he was born in Oklahoma, Calvin Grant Shofner actually grew up in the San Francisco area, where he began to appear professionally during the post-war years while still in his mid-teens. But success didn’t come his way at first, and he spent some time in the rodeo business and later worked as a truck driver. By the early 1950s he’d gone through a brief marriage and divorce, but had finally managed to get some traction on a musical career, even making some appearances on a country music variety show on TV.

Unfortunately Uncle Sam came calling, and he lost a couple of years of career progress fulfilling his military obligation. Returning to his Northern California home area after his discharge, he found work as a DJ while also working in area bands. His big break came in the early 1960s when he was able to latch on to a job as a guitarist with Ernest Tubb’s touring group, the Texas Troubadors. His strong guitar work helped propel several of band’s best records, and within a few years Tubb helped Grant Shofner begin a solo career as Cal Smith.

It was the beginning of two decades of solid record sales for the performer. Smith had moderate early success on songs like “The Only Thing I Want,” “Drinking Champagne,” and “Heaven Is Just a Touch Away,” but in the early 1970s he really hit his stride, with a Top Ten hit on “I’ve Found Someone of My Own” followed by his first chart-topper, “The Lord Knows I’m Drinking.” It also appeared on pop charts, as did his next hit — his biggest — the memorable story-song “Country Bumpkin.” But he wasn’t finished, and soon had another top-seller with “It’s Time to Pay the Fiddler” before beginning to slow down a little in the late 1970s. Like many stars, he eventually relocated to Branson with his second wife and it was there that he recently died at age 81. He is survived by his wife, son, five grandchildren and 15 great-grandchildren.