In 1966, a lot of music fans thought that “Black Is Black” — a huge hit attributed to a group named Los Bravos — was actually recorded by pop star Gene Pitney in an attempt to get around record company restrictions. The story is still bouncing around almost a half-century later, but even though lead singer Mike Kogel did sound a little like Pitney, he was actually German (although he sang in English) and Los Bravos was a Spanish group. 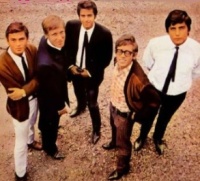 Los Bravos was formed in Madrid in 1965, and in addition to the newly-arrived Berliner Kogel it included four guys who’d worked together in another band. Helping fill out the newly-named Los Bravos were Antonio Martinez and Miguel Danus on guitar, Pablo Gomez on drums, and keyboardist Manuel Fernandez — who would come to a tragic end in 1967, but more later about that.

When the band’s debut single of “Black Is Black” came out the following year, it became a huge million-seller, reaching the top of the charts in Canada and near the top in both the UK and US. The song, which had been written by the English team of Tony Hayes and Steve Wadey, was recorded later the same year by French pop star Johnny Hallyday (Jean-Philippe Smet), whose version topped the charts in his home country.

As for Los Bravos, the group had a moderate hit on a follow-up, “I Don’t Care,” and eventually managed to generate enough music to fill an album, but even though the group’s popularity continued for a while — especially in Europe — things went downhill. Manuel Fernandez committed suicide in 1967 after his young wife was killed in an auto accident, and even though the others kept it going for a while, the group eventually dissolved.

5 thoughts on “Did Gene Pitney Sing For Los Bravos?”