I would think that basing your doo-wop group’s name on something that changed as soon as any of the members had a birthday would be a little silly, but that’s what six friends in Los Angeles did in the mid-1950s when they added up their ages and divided by six. The result was sixteen, which was said to be the secondary meaning of the name they chose when they changed the group’s original name — the Sweet Teens — to the Six Teens. 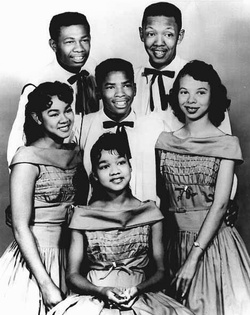 Trudy Williams was the youngest, just 12 when they began so technically she wasn’t yet a teen, but she was the lead singer so nobody was objecting. The oldest was Ed Wells, who was 17, and the others — Darryl Lewis, Beverly Pecot, Louise Williams, and Kenneth Sinclair — were somewhere in between.

The group had managed to get a couple of forgettable records made and released under its old name, but a new record — “A Casual Look” — used the new name, and the platter became a Top Ten hit in 1956. The song’s sound and style was reminiscent of Frankie Lymon and the Teenagers — and maybe the new name helped a little.

At that point, the sextet’s base of operations changed to Hawaii (for reasons unknown) and they found some success in live shows while also hitting the recording studio for follow-up records. Unfortunately they would never be able to generate a record that did as well as their first hit, although songs like “Arrow Of Love,” “Send Me Flowers,” “Only Jim,” and “My Promise” did moderately well. The original group soon dissolved, although it has been restarted from time to time through the years, usually with one or more of the originals on board.