Most of us remember Dale Evans, the long-time wife and performing partner of singing cowboy Roy Rogers, a lady who was often billed as the Queen of the Cowgirls. We might also know that she was an actress and a singer long before she paired up with Roy. But did you know that Roy was her fourth husband, and that she was first married at 14, a mother at 15, and widowed soon after? (Or divorced, according to some sources.) 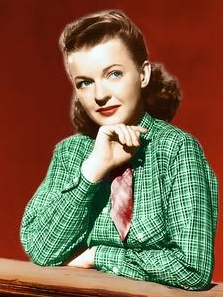 The Texas-born star even had a odd beginning to her life. Born as Lucille Wood Smith, she was renamed Frances Octavia Smith while still a baby. In any case, in the mid-1920s she started high school and soon eloped with her boyfriend. After what was probably a rough couple of years she turned up in Memphis, minus a husband but with a baby boy in tow, and began working in radio.

While working as a staff singer, she changed her name to Dale Evans, a name that she kept when she moved on to Chicago a few years later and began singing with a number of bands in addition to making radio appearances. She’d remarried by then but that marriage ended in divorce in 1935. However, by 1937 she’d married for the 3rd time and was beginning to cast her eye toward Hollywood.

Starting with small parts, Evans soon began finding more and more roles in movies, and during the war years had even managed to receive featured billing, albeit in mostly ‘B’ movies. By then she was into her thirties, press agents were describing her teenage son as her ‘younger brother’, and  she appeared to have missed real stardom. However, when she was cast opposite Roy Rogers in 1944’s The Cowboy and the Señorita, it changed her life. It would be the first of 28 movies they’d make together, and within a couple of years she’d marry Rogers — her fourth marriage and his third, but they’d remain together for the rest of their lives.

3 thoughts on “Dale Evans – Before She Was The Queen”