I never cease to be amazed by the diversity of sounds that influenced early rock and roll, a diversity that even existed within each of the genres themselves. For example, what we now call rockabilly had room for rising young blues rockers like Elvis Presley alongside country music veterans like Link Davis, who first appeared professionally way back in the 1920s.

Lewis Lincoln ‘Link’ Davis was a Texan, born and raised in the Dallas area, and by his early teens was playing his fiddle alongside his brothers at area dances. By the time he’d reached adulthood in the 1930s he had also learned to play saxophone — an 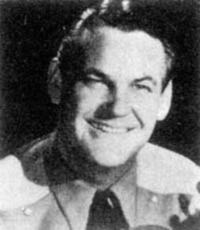 unusual choice for a county music performer, but one that fit in well with the Western Swing style that he’d decided to follow.

During the years preceding World War II Davis was able to work with several different groups, and even showed up on records with some of the best, like the Crystal Springs Ramblers. By the mid-1940s he’d taken it up a notch by forming his own group, the Blue Bonnet Playboys, and eventually cutting some records with himself front and center, singing and often wailing on his sax too.

During the post-war years and on into the early 1950s, Davis began to venture into something closer to what would be called rockabilly. He’d cut a record of “Good Rockin’ Tonight” (although it was titled “Have You Heard The News”) in 1949, and over a period of several years recorded a lot of songs that fit right in with the new wave. Some of his best included “Sixteen Chicks” and the lively “Trucker From Tennessee.” He also accompanied others, like the Big Bopper on his mega-hit “Chantilly Lace.”

But even though Davis had a definite influence on early rock and roll, he never really hit it big himself. He was in his forties by then and his music was still evolving in some ways, with a Southern bayou influence becoming more and more prevalent. He was still knocking on rock and roll’s door even into the 1960s, but a stroke finally slowed him down. He died at age 57 in 1972, but left behind a musical son — Lewis Lincoln Davis, Jr. — who carries on his legacy.