It’s difficult to think about Del Shannon without immediately recalling “Runaway,” his debut record that ended up becoming one of the best known songs in the history of rock and roll. In fact, it was so evocative of the era that it was later used as the theme song of a TV show set in the early 1960s. But even though it was his biggest hit, Shannon had a long string of successful records in the early years. Unfortunately he would spiral down later in life and come to a sad ending. 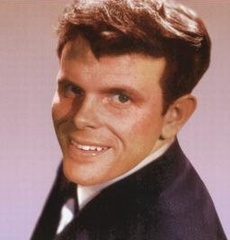 Michigan native Charles Weedon Westover grew up in the Grand Rapids area with an appreciation for country music, and learned to play guitar and ukulele at a young age. He was part of several musical groups before, during, and after his Army service, and in the late 1950s took over leadership of a combo he renamed the Big Little Show Band.

He soon recruited an innovative and talented keyboardist named Max Crook, and by the end of the decade had positioned himself to try to take the next step — making a record. Now calling himself Del Shannon, he reworked a song he’d written with Crook and hit the recording studio. After some early struggles, the end result – “Runaway” – hit record stores in early 1961 and soon shot to the top of the charts.

Although Shannon would never have another chart-topper, it was the beginning of a string of good records that would include a number of Top Ten hits in the 1960s, including “Hats Off To Larry,” “Little Town Flirt,” and “Keep Searchin’ (We’ll Follow The Sun).” But even though he was a talented and versatile performer who was fully capable of embracing changing musical styles, his popularity inevitably lessened in the decades that followed. He was able to stay involved by also turning to the production side of things, but battled alcoholism, and in 1990 he took his own life.