American music fans probably paid little notice when British guitarist Bert Weedon died in April at age 91. He was really never a household name in the U.S. during a long career that began all the way back to the late 1930s. But Weedon did reach a measure of stardom in his native land, and even if he wasn’t quite as cutting-edge as some, his guitar virtuosity made him an inspiration for later British stars like Clapton, Lennon, McCartney, and Sting. 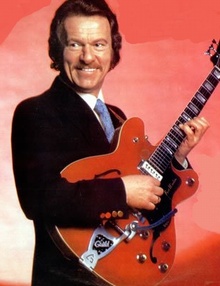 London-born Herbert Maurice William Weedon studied classical guitar, but began appearing professionally as a jazz guitarist in pre-war London, working in various big bands and even leading his own small groups from time to time. However, it would be at least a decade before his popularity rose in a big way, and it was – at least in part – due to TV.

Weedon worked regularly during the post-war years, building a resume by working in well-known bands and providing accompaniment for various singing stars, so he was well positioned when the rise of rock and roll brought attention to electric guitar in the 1950s. In his thirties by then, and as one writer put it, ‘looking more like a bank manager than a guitar hero’, he nevertheless began showing up all over British TV and soon became Britain’s favorite guitarist. Weedon also promoted and sold a guitar tutorial titled Play In A Day, which helped many burgeoning guitarists get their starts.

Ironically, many of his biggest record hits were covers of American hits like “Guitar Boogie Shuffle” and “Apache,” but he also provided fans with the opportunity to hear classics like “Maria Elena” and “Perfidia.” He continued to entertain and make records for many years before finally slowing down a little, but by then he’d become a British national treasure, and his legacy was secured when he was knighted by the queen in 2001.