Although he was sometimes called a crooner, Matt Dennis didn’t really fit the traditional image of a suave performer with a smooth baritone — in fact, his singing voice was soft and often featured a hint of vibrato. But over the course of a long career that began in the big band era he found a lot of success as a singer and pianist, along with respect as the composer of jazz standards like “Let’s Get Away From It All” and his best-known, “Angel Eyes.”

Born into show business as part of a family of vaudeville artists, the Seattle native began to play piano professionally while still in his teens, and soon landed a job with the well-known Horace Heidt orchestra. It 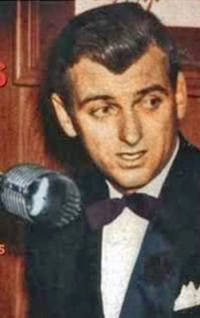 was the early 1930s, an exciting time to be part of the music world, and the young musician began making the most of his opportunities by relocating to Hollywood and working with some of the best around. Included among them were Martha Tilton and Jo Stafford, who was then part of the Stafford Sisters singing group but was soon to join the Pied Pipers.

Dennis was deeply involved in everything, not only singing and playing, but also arranging music and even acting as a voice coach, and when Stafford and her new group were hired by Tommy Dorsey, he wasn’t far behind. Performing the same duties for Dorsey while also writing a number of new songs for the band meant that he was also part of a new young crooner’s success — Frank Sinatra.

Although his career was interrupted by his World War II service, Dennis did manage to spend a lot of his time in music-related duties, including working with Glenn Miller’s military orchestra. In the post-war years things continued as before, with Dennis keeping busy as a composer, often collaborating with lyricist Tom Adair, and working as the music director of his good friend Dick Haymes’ radio show.

For the next couple of decades Dennis kept working in radio and then TV, while often hitting the nightclub circuit, and he made a few records too, but by the late 1960s he was beginning to wind down toward what would be a long retirement. He was 88 when he died in 2002.

3 thoughts on “Matt Dennis – A Different Kind Of Crooner”