Even if you think about the sheer number of silly songs that have shown up in pop music through the years, you still have to classify 1960’s “Alley Oop” as one of the most unusual. The idea came from producer/musicians Gary Paxton and Kim Foley, a couple of experienced pros who’d formed a studio band they called the Hollywood Argyles. The platter (which was rumored to have been made while most of the guys were drunk) rocketed to the top of charts so quickly that they then had to scramble to form a real group. 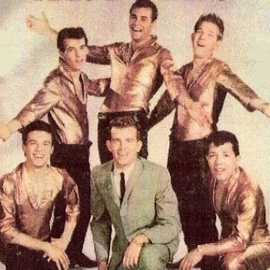 The song itself had been written and recorded a few years earlier by teenager Dallas Frazier, who would go on to a long career as one of country music’s most accomplished songwriters. It celebrated the caveman hero of a comic strip, and that might not sound like a formula for success but the R&B flavored version offered up by the Hollywood Argyles caught the fancy of lots of record buyers and jukebox patrons.

The extended group did manage to put together enough songs to fill an album, but it was an uneven mix of novelty songs and covers. However, there were a few diamonds in the rough, among them “Yakety Yak,” “Honky Tonk,” and “She Know a Lot About Love.”

That was about it for the Hollywood Argyles, although Paxton and Foley would later be the guys behind “Alley Oop Cha Cha Cha” by the Prehistorics. In the years since, both have gone on to long and varied musical careers and are still around. Alley Oop — the comic strip, which began in 1932 — is also still around.

4 thoughts on “The Silly Saga Of Alley Oop”