Let’s face it. When you think of Carmen Miranda, you immediately form a mental picture that is probably like the one shown here: a vibrant performer with a colorful, outlandish costume that often featured lots of fruit, especially bananas. But even though the popular image of the entertainer is somewhat accurate, Carmen Miranda’s life wasn’t all laughter and song.

Although she was a lifelong resident of Rio de Janeiro, Maria do Carmo Miranda da Cunha was actually born in Portugal and emigrated to Brazil with her parents while still a baby. During the late 1920s — still 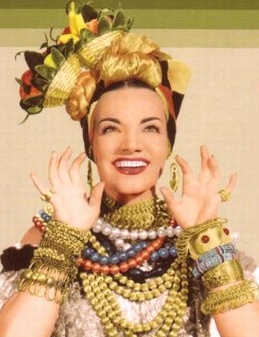 just a teenager — she began singing on local radio and soon became a regular in Rio night clubs. Her stardom was assured when she signed a recording contract with RCA and was turned into a world-wide sensation, eventually appearing regularly in movies and also starring on Broadway.

But there was a down side to all this. In those days Hollywood was fond of promoting Latin performers in a very focused way, almost condescending and certainly restrictive. Miranda was repeatedly cast in the same kind of role, movie after movie, and was always frustrated by her lack of opportunity to move in different directions. In addition, whenever she returned to Brazil she often faced criticism for allowing herself to become ‘Americanized’, which certainly didn’t help with the depression that she fought for much of her life. (A 1995 documentary titled Carmen Miranda: Bananas is My Business shed some light on her difficult personal life, including problems with alcohol and drugs. See trailer below.)

During the post-war years Miranda’s career in movies would gradually grind to a halt, but she continued to be popular on the club circuit and in countless TV appearances. However, her determination to continue pushing herself might have contributed to what happened in 1955. While taping an energetic song and dance number for a TV show she collapsed, and after later returning to her home, died from a heart attack. She was just 46.