Regular visitors to the GMC will have figured out by now that I sometimes write something related to books or movies I’ve recently enjoyed, although it can sometimes be a little challenging to find a musical connection. Lately I’ve been reading The Last Gunfight, a new book by Jeff Guinn that takes another look at the whole story behind Wyatt Earp and his brothers and their mis-adventures in Tombstone. 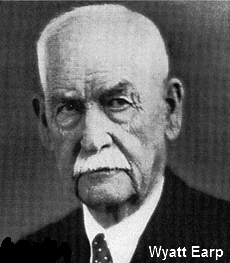 Of course, most of us now realize that the countless books, movies, and TV shows that have been generated in the last century or so have been mostly wrong. Wyatt himself — who didn’t die until 1929 at age 80 — was more than happy to have himself turned into a hero in later years, but getting to the real facts has always been difficult. There have been a number of efforts to more closely examine what happened in Tombstone in 1881, and even though Guinn’s book digs pretty deeply into the whole thing it’s still difficult to know which side was in the right — if either was.

Tombstone was a silver-mining boomtown in those days, striving for respectability while still subject to the hardships of frontier life, complete with various feuding factions that were ready to fight over every sleight — real or perceived. The Earps had a checkered past of their own, and at the time of the big gunfight there were a lot of side issues and undercurrents in place, so it wasn’t just a simple case of lawmen against bad guys. And the big gunfight (which didn’t actually occur at the O.K. Corral) wasn’t the end of things — in the following months there would be investigations, hearings, and much more spilled blood on both sides. It now seems that the Earps were more right than wrong, but we’ll probably never know for sure.

3 thoughts on “What Really Happened In Tombstone?”