Rock and roll’s rise in popularity during the 1950s helped create an exciting — if confusing — time for musicians, as they tried to find their place in the midst of all that was going on. Many of those with a  country background began to gradually move away from the music of the heartland, looking for the elusive sound that would appeal to modern fans, only to later return to their original roots.

Which brings us to our subject, a guy who enjoyed success in early pop music but would later follow the same route as many from the era by returning to his country beginnings. Jerry Wallace, who climbed the charts early in his 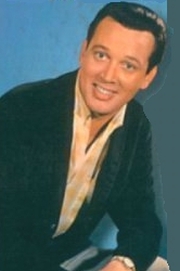 career with hits like “Primrose Lane,” would go on to a long career as a country crooner, and be fondly remembered as ‘Mr. Smooth’ to his many fans.

The son of a grocer, Wallace came out of rural Missouri and scuffled around for a few years before eventually settling in California. By the mid-1950s he’d managed to cut a few records that didn’t set the world on fire, but he finally did climb the charts with 1958’s “How The Time Flies.” It would soon be followed by his biggest pop hit, “Primrose Lane.”

While still occasionally hitting the recording studio, Wallace also began trying to work his way into an acting career. But even though he got a few roles — and also had a good-charting record with his version of “In The Misty Moonlight” — both his record sales and his acting career were soon trending downward. He decided to return to the comforts of country music, and it would be his muse for the next several decades, as he sold a lot of records with songs like “After You,” “Do You Know What It’s Like To Be Lonesome?”, “To Get To You,” and many others.

Unfortunately, he also had a lot of battles with record companies through the years, which might have cost him some career momentum. Still, he entertained his fans for a lot of years, and was still making occasional appearances even in the new millennium before finally dying at age 79 in 2008.