When Japanese pop singer Kyu Sakamoto’s ballad “Ue O Muite Aruko (I Look Up When I Walk)” first became a hit in his home country, it had nothing to do with sukiyaki, a familiar meat and vegetable dish. But “Sukiyaki” was the name given to the song by record promoters when it was brought to Europe and America, because they thought that it would be easier for Westerners to recognize and remember. And even though one critic compared the process to changing the name of “Moon 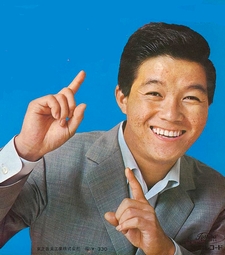 River” to “Beef Stew,” the record did become one of 1963’s biggest hits. It also became the best-selling Japanese-language record of all time.

Hisashi ‘Kyu’ Sakamoto was born in the city of Kawasaki during the dark days of World War II — in fact, just three days after Pearl Harbor. While he was growing up in post-war Japan he began to gravitate to music, first as a trumpeter and later as a singer, appearing in area jazz clubs while still a teenager. Signed to a recording contract in 1959 as part of a group, he later turned to a solo career and began to rise in popularity. His big record soon followed.

The name change came about when British and American record companies first began promoting versions of the song by other musicians, and the name stuck when Kyu’s Japanese original made its breakout appearance in Western markets. In subsequent years, many different musicians would record the song and some of those would do very well. Among the best were versions by rockers like the Ventures, easy listening pros like Billy Vaughn, and — possibly the most unusual — a Spanish rendition by the tragic Latina star, Selena. (Video below.)

As for Sakamoto, he would experience a solid but gradually diminishing career over the next couple of decades, before dying young in 1985. He was one of the more than 500 passengers to perish in the crash of Japan Airlines Flight 123, which remains the the deadliest single-aircraft accident in history.