I’ve always enjoyed listening to the pop-music harmony groups of the Fifties and Sixties — guys like the Lettermen, the Four Freshmen, and others. They pleased a lot of fans with a sound that fit somewhere between earlier groups like the Pied Pipers and newer combos like the Beach Boys.

But there were some very talented bunches around who never really hit it big, at least as measured by huge record sales or lasting fame. One of those was the Arbors, a group that only had a few moderately successful records but went on to prosper in a different way. 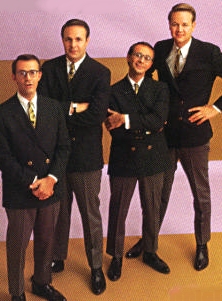 The foursome was formed in the early Sixties by two sets of brothers, all students at the University of Michigan in Ann Arbor. Ed and Fred Farran, along with Tom and Scott Harrick, began calling themselves the Arbors (which probably helped endear them to local audiences), and found that they were soon a hit in area clubs.

Deciding to try their luck in New York, the guys headed East and subsequently managed to get signed to a recording contract. After spinning their wheels for a while, they finally recorded their first successful record, “Symphony For Susan.” Although it didn’t approach the upper reaches of the charts, it was a solid seller that helped keep the group afloat.

Over the next couple of years, the Arbors followed up with records of other soft tunes like “Graduation Day” and “Just Let It Happen,” but with limited success. The group began to diversify in a couple of ways — first by recording “Valley Of The Dolls,” a tune meant to be part of the movie of the same name. Unfortunately it was not used in the film.

The Arbors also began moving closer to the leading edge of pop music. A melancholy version of the Box Tops’ hit, “The Letter,” (video below) was a definite change of pace, and reached new heights on the charts. The group followed with reworkings of other popular songs, like Dylan’s “Like a Rolling Stone,” but even though the sound was intriguing, record sales lagged.

Eventually the Arbors found a solid career path, but in a different way. The guys moved behind the scenes and began performing promotional spots and commercial jingles. They did so well that they ended up spending over three decades as one of the busiest and most successful singing combos around — even if we didn’t see their faces.

3 thoughts on “The Arbors Found The Path To Success”