One of the more interesting little stories in jazz is that of Pete Sims, who was born  in New York in 1938. A drummer who began finding some success in the Fifties while playing percussion in Latin bands, he adopted the name Pete La Roca to better fit in. He continued to do well after moving to the mainstream jazz world, but later gave up music to practice law — and once had himself for a client. 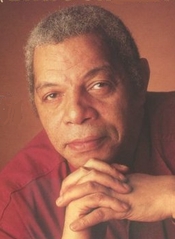 In his early years he was a valuable part of many modern jazz groups and played with some of the greats, including Sonny Rollins and Jackie McLean, and was even Coltrane’s drummer in the first incarnation of that legend’s quartet. But even though Pete was a solid drummer, on many of his performances from those days he seemed to fade into the background a little. Still, there were times when he made his precence known. (You can see a very nice feature story — complete with music and video — on the Drummerworld website.)

What is probably Pete’s best-known piece, “,” from 1965’s Basra — his debut album as a leader — seems to again be a case of him comfortably inhabiting the background, but he does show his stuff on other tracks. His second album as a leader, 1967’s Bliss!, included a young Chick Corea on keyboard, and that turned out to be significant. Pete had apparently found time through the years to attend law school, because in 1968 he gave up music and began practicing law. As it turned out, one of his clients was himself — he sued the record company because they had released his album under Corea’s name.

Eventually Pete came back to music and did well with an album called Swingtime, and even these days he still occasionally performs. No word on whether he still practices law too.