As a traditionalist — at least in most things — I have to admit that finding a new album that’s reminiscent of the best in straight-ahead, traditional jazz is a distinct pleasure. It’s sort of like running into a rumpled old friend and realizing how much you’ve missed him.

Veteran drummer Alvin Queen’s Mighty Long Way, now out on the Justin Time label, goes a long way (sorry) toward satisfying my retro side. Some of the music even predates Queen’s own career, which started gaining traction in the late 1970s, and reaches back to his 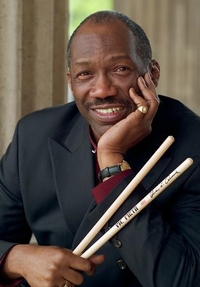 childhood. In his words,”I decided to select a certain time in my life [because] those were the most important years regarding learning and being creative…”

As a drummer, Queen has for many years worked with most of the big names in jazz, and has also generated a number of albums as a leader. He has spent much of his career based in Europe, but this time around is recording in New York, where he’s joined by a half-dozen solid pros. Included among them are Jesse Davis on alto sax, trumpeter Terrel Stafford, and organist Mike LaDonne.

The ten tracks included on the album are mostly traditional jazz standards or newer songs in the same style, although there are a couple of extra treats too. My favorite here was probably a rollicking version of the Ray Charles hit, “I Got A Woman,” with LaDonne’s organ play evocative of Jimmy Smith in his prime.

Other good pieces include Oscar Peterson’s “Sushi,” which features some good stickwork from Queen. Although it’s not one of Peterson’s better-known pieces, it was extra meaningful for Queen, who was often featured on the song when playing with Peterson earlier in his career. Peterson’s “Backyard Blues” is also included, and it’s a good showpiece for Stafford, while the Wayne Shorter composition, “United,” does the same for saxman Davis.

Lots of other good pieces here — too many to mention — but an enthusiastic thumbs up for this album. Fans of almost any type of jazz will find something to like, but traditionalists will be especially happy — as you might be able to tell if you could see the smile on my face.