Fans of modern country music might not immediately recognize his name, but for a couple of decades the charismatic and talented Hank Thompson was one of the biggest stars around, a master of Western Swing who was equally at home with romantic ballads or pure honky-tonk.

Henry William Thompson was yet another of the many Texans who have always populated the music world, and he took to it from an early age. His first instrument was the harmonica, quickly followed by the guitar, and by the time he was a teenager he was using all his skills to win a number of amateur contests. His musical career was interrupted by World War II, but during his Navy service he continued preparing, 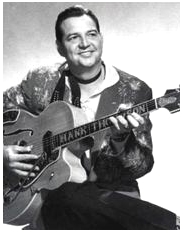 adding songwriting to his many talents. By the time he was discharged in 1946 he hit the ground running, and formed what would become his signature band, the Brazos Valley Boys.

Over the next few years Hank and the boys gradually refined their sound and began making a lot of fans, including country star Tex Ritter, who became one of Hank’s biggest boosters. The band also made a lot of records, finally hitting it big in 1949 with their recording of “Humpty Dumpty Heart,” a huge hit and just the first of many that quickly charted for the red-hot group. Over the next few years  Thompson recorded hit after hit, leading up to his biggest, 1952’s classic “The Wild Side of Life.” It became one of the most legendary songs in country music, and also generated Kitty Wells’ response, “It Wasn’t God Who Made Honky Tonk Angels.”

Over the next couple of decades Thompson continued spinning out dozens of hits, but he didn’t stop with just record sales. A master showman, he had developed his singing style and his look — he was always sharply dressed in colorful Western clothes — into a first class stage show, and it wasn’t long before he was showcasing it on his own TV program. He even did some of the commercials! (Video below.)

He was also one of the most forward-thinking musicians around, championing the development of the LP record while becoming one of the first to record a live album and to record in stereo. He also helped promote developing artists like Merle Travis and Wanda Jackson, but the eventual movement of country music to a more modern, pop-based style began to erode his popularity. Throughout the rest of his life he continued to perform and record at a lessened pace, and was still making occasional appearances even in the decade leading up to his death in 2007.