When I’m reviewing a new album, I have the unfortunate habit of occasionally getting distracted by something that has little — if anything — to do with the music. Even worse, the object of my distraction is often something that’s unworthy of a serious music critic. Good thing I’m not one.

A new album from pianist Eyran Katsenelenbogen carries the title of 88 Fingers, but as near as I can tell from pictures he doesn’t have that many digits on his hands — he just plays so skillfully that it seems that way. He also has a very long name, one that makes me appreciate the ability to copy and paste while writing this. But before you condemn me for focusing my attention on something trivial like that, please note that the artist has produced this 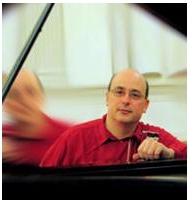 album on his own record label — and it’s named Eyran Records, not Katsenelenbogen Records.

But let’s talk about the artist and his music. Katsenelenbogen is enormously talented, a classically-trained pianist who has generated a number of solo albums and is well-respected, both by his peers and by knowledgeable fans. A descendant of Felix Mendelssohn, Katsenelenbogen has been compared to jazz icon Art Tatum for his mastery of the keyboard and his improvisational abilities.

On this album he’s offering up a collection of 16 pieces that are mostly standards but there are a few surprises too, including improvisations on a couple of classical themes — and one of those is hip-hop flavored. That would be “Improvisation On Promenade Theme From Pictures At An Exhibition,” and even though I don’t pretend to be an expert in hip-hop (surprise) Katsenelenbogen does provide an intriguing take on what is probably Mussorgsky’s best-known work.

More in my comfort zone were the pianist’s interpretations of pop standards such as Rogers and Hart’s “Lover,” Irving Berlin’s “What’ll I Do,” and the always welcome “September Song.” In all cases, Katsenelenbogen’s improvisational skills help provide a new twist on familiar melodies.

The artist hasn’t forgotten jazz standards and among the best are a couple composed by Dizzy Gillispie. My favorite was probably “Night In Tunisia,” but a close second would be Diz’s bebop classic, “Groovin’ High.” Both pieces share a common thread that courses through this album. It’s not for casual

listeners, because many of the tracks take unexpected paths and offer soft interludes that require close attention, but the reward is some outstanding play from a pianist at the top of his game. Highly recommended for jazz fans who appreciate inventive solo piano play.