I was sorry to see that veteran cowboy movie star Monte Hale has died. I’ve written before about my childhood fondness for Saturday matinees with Western movies, and even though he wasn’t one of the bigger stars I remember him well. The funny thing is that he’s now described as a ‘singing cowboy’ and I didn’t really remember him singing in those movies.

But apparently my memory is faulty (big surprise) because he did indeed play the guitar and sing, although you’d be hard pressed to find a solo album after all these years. However, his singing can be heard on a clip from an album called Singing Cowboys Collection, and it’s a song that sort of fits the occasion of his passing — “In My Stable (There’s An Empty Stall).” 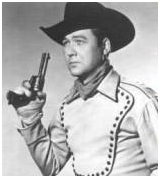 Hale, whose real name was Buren Ely, was an authentic Westerner, growing up in Texas and Oklahoma and gravitating toward a musical career even as a child. As he approached adulthood he began appearing in area shows, and gaining experience. During World War II he was able to join the USO tour, and that led to a singing and acting career at Republic, a studio that knew a thing or two about Western movies.

Movie cowboys were very popular, and even though Buren — now known as Monte Hale — had a few bit parts in other kinds of movies, it wasn’t long before he began making a name as a cowboy star. Republic eventually featured him in a series of nicely-done color features. (Check out the gorgeous movie posters on the Monte Hale website.)

At the height of his fame, Monte Hale was not only a popular movie star but also had his own series of comic books — a sure sign of success. Eventually, his movie career wound down and his last appearance was a featured role in the 1956 Hollywood blockbuster, Giant, starring Rock Hudson and James Dean.

He continued to be active for a lot of years, working in TV and other venues, and was one of the forces behind the Autry National Center of the American West. In 2004 he received a ‘Star’ on the Hollywood Walk of Fame. He was 89 when he died and is survived by Joanne, his wife of 31 years.