I have to confess that I haven’t been to a New Year’s Eve party for a long time, but I would be willing to bet that at least a few party-goers will still follow the tradition of singing “Auld Lang Syne” when midnight arrives. I would also guess that most of them will have no idea of the origin of the song, and by that point of the evening they probably won’t care. That’s why I’m taking it upon myself to furnish a little info in advance.

The song actually started life as a poem written by Scottish poet Robert Burns well over two hundred years ago. However, Bobby didn’t actually coin the phrase that serves as the title. It had been used much earlier by a number of poets and 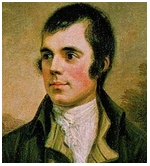 had even appeared in early folk songs. It literally translates as “old long since”, and it means “days gone by” or “long ago”. It was also used as a beginning in fairy tales — for example, “days of auld lang syne” would equate to the more familiar “once upon a time”.

Burns also described his poem as a song to some of his contemporaries, but after all this time opinions vary on what melody was used. Still, the song’s use  during holiday celebrations steadily increased through the years, and after more than two centuries has not only spread around the world but has evolved into the familiar version we now know.

But it can still be a confusing song. In the movie, When Harry Met Sally, Billy Crystal’s character gives voice to those concerns. “I mean, ‘should old acquaintance be forgot’? Does that mean that we should forget old acquaintances, or does it mean if we happened to forget them, we should remember them, which is not possible because we already forgot?”

One of my favorite versions of the song doesn’t have that problem, since it’s an instrumental. During the glory days of the big band era, New Year’s Eve dances were a popular attraction. If I had been around in those days I would have loved to have heard Glenn Miller’s band playing their swinging version of “Auld Lang Syne.”

Happy new year to all.