The prospect of hearing the music of legendary Gypsy guitarist Django Reinhardt always captures my attention — and my attention is sometimes a difficult critter to snare. But Hot Club de Norvège did just that with the title of their newest album on the Hot Club Records label, Django Music. Of course, to complete the process the music on the album has to live up to the promise of the title, but I’m happy to report that these Django-nuts from 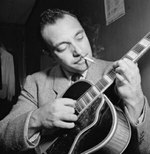 Norway do just fine with that.

A quick history lesson for those who might be a little unsure about the guy with the funny name: Jean Baptiste ‘Django’ Reinhardt was born in a Gypsy camp in Belgium but grew up mostly in France, where he rose to musical prominence in the 1930’s. He teamed up with violinist Stéphane Grappelli to form the Parisian jazz group Quintet of the Hot Club of France, and eventually became an international star. Although he died in 1953, he’s been an influence for countless guitarists and is still enormously popular with fans, especially in Europe.

Which brings us – finally – to the subject of this review, Hot Club de Norvège, a bunch of Norwegians who are now in their third decade of performing Gypsy Swing. John Larsen and Per Frydenlund share the guitar duties (along with an occasional vocal), Svein Aarbostad handles the bass, and Finn Hauge chimes in with violin and harmonica. They’re all skilled musicians who live and breathe the music they play, and their dedication to it and their comfort level together is evident on every track.

The group is a popular attraction on tour and is also part of the larger stable of musicians that all record under the Hot Club Records label. It’s an astonishingly large catalog of albums and illustrates the amount of attention still being paid to this type of music.

The collection of 13 tunes here includes several written by Django, such as “Manoir de Mes Reves,” “Nuages” and “Swing 42,” along with many of the familiar jazz standards of that era. Among the best of the latter are “I Can’t Give You Anything But Love,” and the light and mischievous “My Heart Belongs To Daddy.” My favorite was probably “Coquette,” an almost forgotten old piece given new life by the guys.

It’s a nice collection of Gypsy Swing-style music, well-performed by a group of outstanding musicians who have made it their life’s calling for three decades. It doesn’t get much better than that.