Most of us are familiar with the term ‘One-Hit Wonder’, especially if we’re among those who love to listen to Oldies. In an earlier post, I suggested that artists whose one hit reaches the top of the charts should be called Super-One-Hit Wonders, but what would you call someone who had one big hit and a couple of lesser hits? Maybe you could figure that the extras were each 1/3 of a hit, total them up with the big one, and call the group ‘1-2/3 Hit Wonders’.

That’s pretty silly, but the fact is that there a lot of musicians who would fall into that type of in-between category. That being the case, I’m going to coin 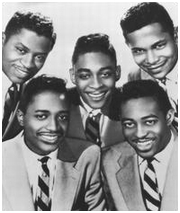 a new term: One-Hit-Plus Wonders. I offer it for general use by those who find it apt but won’t hold my breath about royalty payments.

The Danleers were a very successful but short-lived Brooklyn singing group that flourished for a while in the late Fifties. Lead singer Jimmy Weston was accompanied by Johnny Lee, Nat McCune, Willie Ephraim, and Roosevelt Mays. Supporting the guys as manager and occasional songwriter was Danny Webb.

Danny wrote the song that was their first real success, “One Summer Night,” which rocketed up the charts and became a million-seller after its release in 1958. The group rode the rocket up too and soon found themselves booked on national tours and even appeared on Dick Clark’s new TV show.

They followed up with some good songs, including “I Really Love You,” “Prelude To Love,” and one of my favorites, “Picture Of You.” (Video below.) Unfortunately their fortunes went South, and by 1959 the group was breaking up. They were briefly reformed a time or two in the Sixties and again in the late Eighties, as part of the oldies circuit.