I was looking through some old childhood pictures recently and found one that showed me playing ping-pong with my sister. Not a particularly unusual occurrence except for one thing — we were playing on the dining room table, which had been fitted with one of those clamp-on nets. You remember those, right? I guess they’re probably still around these days but I’d bet they’re not as commonly used as they were then.

Thinking about how we were able to improvise in that way got me to thinking about improvisation in a musical context, which is a whole different thing. Our ping-pong playing apparatus came about because we were ‘making do’ with what we had available to us, and would not have happened if we’d had a regulation ping-pong table. (Although I 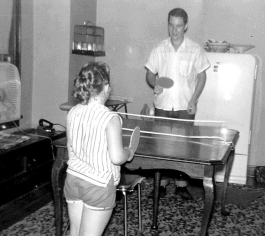 don’t remember anybody having one in their home in those days.) But musical improvisation isn’t just a case of simply ‘making do’ — it’s a process of discovery fed by individual initiative, and has always been vital to the growth of music.

Obviously, every type of music throughout history has had many instances of improvisation. Even in the era of Mozart’s perfectly written and arranged musical pieces, conductors probably had to occasionally slap down an adventurous soloist, but modern music – especially jazz – has thrived on improvisation. You could even make a pretty good argument that jazz couldn’t exist without it.

We probably all have our personal favorites from among an almost endless roster of innovative jazz artists, and I’m not going to even attempt to come up with any kind of list. But what I will do is focus on one type of jazz improvisation that I especially like, and point to a musician who was very, very good at it.

I’ve always found it very special when an accomplished instrumentalist takes a familiar, established standard and turns it on its ear, following a path that ranges far and wide while still keeping in touch with the basic melody. One of the best I’ve ever heard at that art — just happened to also be named Art.

Art Pepper was one of the greats, an alto saxophonist who was a contemporary of Charlie Parker but had an entirely different musical signature. As one of the stalwarts of the ‘West Coast Sound’, he turned in several decades of brilliant performances, while repeatedly fighting drug problems — and serving prison terms related to his addiction.

His life provides a fascinating story, one that I would encourage readers to pursue, but it is his music that remains his legacy. In the years before his death in 1982 he seemed to have conquered most of his demons and his music was better than ever. A good example of his improvisational genius is from that era. It’s “,” an old standard that Art turns into something magic.

The art of improvisation — demonstrated by a master.