We were watching an old movie musical on TV the other night – Skirts Ahoy with Esther Williams – and among the supporting cast I noticed a singing group with a familiar-sounding name, the DeMarco Sisters. Hmmm (I thought) weren’t they the ones who had a big hit with “Teach Me Tonight,” and often made appearances on Perry Como’s TV show?

Well, no. As I later found out, it’s easy to get mixed up when remembering singing sister groups from those days, especially the lesser-known ones. The DeMarcos did show up from time to time in movies and on TV but were never too big in record sales, and “Teach Me Tonight,” was actually a big hit for the Cuban-born DeCastro Sisters, not the DeMarcos, who were from New York. 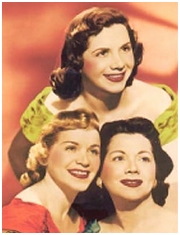 And finally, I learned that it was the Fontane Sisters who were associated with Perry Como, appearing on his post-war radio show and the subsequent TV version, where they not only sang with him but also did some of the Chesterfield commercials.

New Jersey natives Bea, Geri and Margi Rosse, who performed professionally as the Fontane Sisters, spent a large portion of their careers pretty closely tied to Como but they did have their own successes. Even though they often backed the crooner on records they had some hits of their own in the early years, including “Tennessee Waltz.” In the mid-fifties they signed with Dot Records and had a number of songs on the charts, including their biggest hit, “Hearts Of Stone,” in addition to “Seventeen” and “Adorable.”

However, as the decade drew to a close things were changing in music and in their personal lives. Rock and roll was beginning to dominate the pop music world, and at the same time the sisters were all settling down into marriage and family life. They soon retired from the business and concentrated on husbands and kids, and lived the rest of their lives happily in private.

3 thoughts on “Perry Como And The Singing Sisters”