Every time I see another collection from Time-Life, I am once again floored by the skill and determination they exhibit in assembling these things. I can almost picture a room full of elves, all with little phonographs spinning furiously as they listen to endless oldies, deciding which to include in their latest boxed set.

The elves must have worked their tiny fingers to the bone with Flower Power: Music Of The Love Generation, a new anthology that continues the theme of the Summer Of Love but expands on both sides of 1967. It’s 10 CDs with an amazing total of 175 songs from the late 1960’s to the early 1970’s, and although I lived through that period I’m still staggered by how many memorable songs it produced.

The set is divided into five double CD sets, each with a theme that’s explored in an included booklet, and all are enclosed in a nice little box covered with a psychedelically decorated VW van. (I think I remember seeing that van around in those days — it always looked smoky inside, and had a funny aroma emanating from it.) 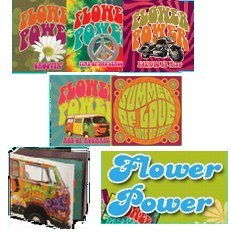 The five dual sets (10 CDs) are titled Groovin’, The Time Of The Season, Born To Be Wild, Age Of Aquarius, and finally Summer Of Love, which is the pair devoted exclusively to that magic year of 1967. (That dual set – with an added DVD – has been available separately since June.)

The five themes do help structure and organize things a little for us, but although some songs are obvious matches, such as Steppenwolf’s “Born To Be Wild” included in the – surprise – Born To Be Wild set, others could be considered appropriate for more than one set. Bottom line, if you’re looking for favorites you should check the complete listing carefully.

Here are some of the tracks, but keep in mind that what I’m giving you is just the tip of the proverbial iceberg. (Or maybe it would be more appropriate to say that it’s sort of like the paint job on the VW van — it just hints at the delights inside.)

Flower Power: Groovin’: The Monkees: Daydream Believer * The Bee Gees: I started a Dream * The Kinks: You Really Got Me * The Young Rascals: Groovin’ * Peter, Paul & Mary: Leaving on a Jet Plane * Seals & Croft: Summer Breeze * Tommy James and the Shondells: Crystal Blue Persuasion * Jonathan Edwards: Sunshine * Sonny & Cher: I Got You Babe.

Summer of Love: Procul Harem: A Whiter Shade Of Pale * The Turtles: Happy Together * The Association: Windy * The Mamas & the Papas: Creeque Alley * The Beach Boys: Heroes and Villains * Reflections: Diana Ross and the Supremes * The Monkees: Pleasant Valley Sunday * The Music Machine: Talk Talk.

Any collection of this sort can never be all-inclusive. After all, there is a limit to the number of tunes you can cram into a set, and there will be some not available because of licensing issues, but the clever elves at Time-Life have done a pretty good job with their labors on this one.

One thought on “REVIEW: Flower Power: Music Of The Love Generation”