I have written some articles with unusual juxtapositions, but I think this is one of the strangest. It’s about an early jazz pioneer, a man who is especially remembered for one distinctive song, who also happened to be a member of a family involved in a legendary hillbilly blood-feud. 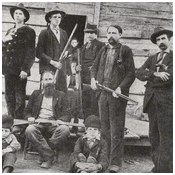 I think most of us have heard of the Hatfield-McCoy feud, but probably don’t know all the facts, or even where facts end and myths begin. I won’t go into too much detail here – after all, we’re about music – but sometime around the close of the Civil War, two powerful and influential clans in the hills near the Eastern Kentucky/West Virginia state line began a bitter quarrel. It was deadly serious and resulted in a lot of turmoil – including fatalities – for over forty years until things finally calmed down a little.

If you’re interested in knowing more about the feud, here’s the Wikipedia link, but let’s move along to the musical career of one of the descendents. Just about the time hostilities were easing up between the families, young Clyde McCoy and his parents moved from Kentucky to Ohio, and although I’m sure Clyde was very familiar the the particulars of the feud, he soon found his true interest — music.

He began by learning the trumpet, then the trombone, and before too long found himself playing in various amateur groups. By the time he was was 14, he was making some money in riverboat bands, and within a couple of years had even formed his own band. He was on his way.

While still in his teens, he traveled to New York to try to make his fortune in the booming jazz scene of the 1920’s, but big-city success eluded him. After a few years he decided to try California, and that seemed to be a better idea as his ever-improving band began to get more attention. By now he’d perfected his own sound, a style known as “wah-wah”, with his muted trumpet almost seeming to speak to listeners.

Over the next few years, his band continued to grow more successful as they toured the country, gaining recognition and getting better and better gigs. It was at one those spots – the prestigious Drake Hotel in Chicago – where in 1930 he premiered a song he’d written that was to become his trademark, a tune that utilized his playing style perfectly — “Sugar Blues”. The public went wild for it and after he recorded the song, record sales skyrocketed. 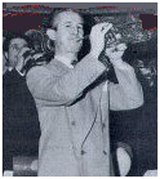 This began a fairly lengthy period of popularity for Clyde and his band, and although his Dixieland-flavored style of music was a little different than that of the newly fashionable swing bands, he still had a lot of fans. He had a number of solid sellers, including “In the Cool of the Night”, “Smoke Rings” (which was Glen Gray’s theme) and “Wah Wah Blues”, but none approached the sales of his huge first hit.

He continued to be successful through the 1930’s and into the war years. At that time, he and most of the members of his band joined the Navy and continued to play together and entertain servicemen. In the post-war years, Clyde found the going more difficult although he still had the occasional success in recording and touring. Eventually, all the big bands found that the listening and dancing public was moving on to newer music, and Clyde was just one of many who found their careers in decline. He eventually retired to part-time performing and teaching music, and died in 1990.