I know what you’re thinking, because I had the same thoughts when I received this new album for review. Boots Randolph, the guy whose honkin’ sax ruled Nashville for years, is still around? The guy who struck gold with “Yakety Sax” is still tooting his horn? Well, yeah — and the truth is, he sounds pretty good on this collection, A Whole New Ballgame, due out in early June on the Zoho label. 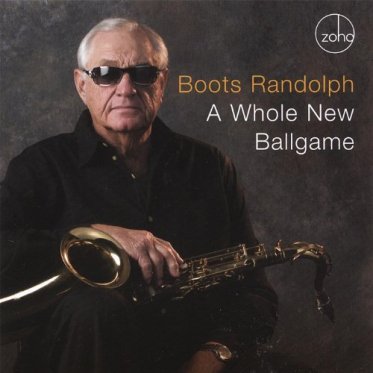 As his fans can confirm, Boots has actually been pretty busy in all the years since that era when he and Chet Atkins were the two biggest instrumental stars of country music. He’s continued to perform live in various spots, including the successful nightclub he owned for a long time in Nashville, and he’s also periodically generated new albums.

This album is something a little different for him. It’s composed entirely of classic standards – what he calls “evergreens” – and none have appeared on any of his dozens of previous albums. His history as a country star, or even before that, his experiences playing sax for singers like Buddy Holly, Elvis Presley, or Johnny Cash, would lead you to believe that he’d be a little adrift on the songs on this album, but you’d be wrong. He does very well with them, and if his breathy (and OK, still slightly honkin’) style isn’t to your taste, you still have to admire the sentiment he puts into every song.

Although his style is basically straight-ahead with minimal improvisation, that approach probably is best for this material, which includes nice versions of tunes such as “I’m Beginning To See The Light”, “Candy”, and an especially nice version of “Cry Me A River”. However, he does have the ability to adapt to particular songs, and it was nice to hear him in a bluesy mode with “Basically Blues”.

I thought that his interpretation of “Billy’s Bounce” was reminiscent of the early days, and very nice. His “Stomping At The Savoy” was evocative of the old big band versions but fell a little short for me, although that might be because my familiarity with some the originals. I enjoyed his turn on “Nature Boy”, short, but soft and melodic, and he bravely attempts (with mixed results) “Round Midnight”, a song that according to Allmusic has been recorded 1165 times, by all the greats and a host of others.

A nice middle of the road collection from a Nashville legend, still blowin’ and still performing.